Some things gestate a long time before they emerge in some form. After reading The Hobbit in 5th grade, Smaug the dragon became a fixture in my notebook doodles right through high school. Then I got it into my head that I wanted to have a dragonhead lamp, but how to build such a thing? Hmmm. I considered that I could make his mane from cloth—no, that could catch on fire. More, “Hmmm.” Fortunately I came across the manufacturing process called, “investment casting.” It is also known as “lost wax casting.” However you call it, “investment” and “lost” are key terms to understanding what a risk you are taking when you choose this path. It is a one-shot, unrepeatable process.

FIRST MOULD
The first real-world step step after drawing plans is to sculpt out of clay the figure you have envisioned. This is the model. Then you make a two-sided plaster casting of that model. This is the mould. You separate the two halves of the mold and, yes, you rinse away the original clay. In other words, you destroy your model! So now you are left with a negative impression of your figure. You put the plaster mould halves back together and pour molten wax into the now-empty shape and swish it until a shell of wax is formed in the shape of the original figure. The plaster mold halves are removed and now there is a wax impression of the original sculpture. This wax form is cleaned up and perfected. To it, is added in more wax channels and a cone so that the wax has pathways to melt away, and also so molten metal can be poured in, with venting.
The below photo shows the cleaned-up black wax shell of the dragon head before vents and pouring cup were added to it: 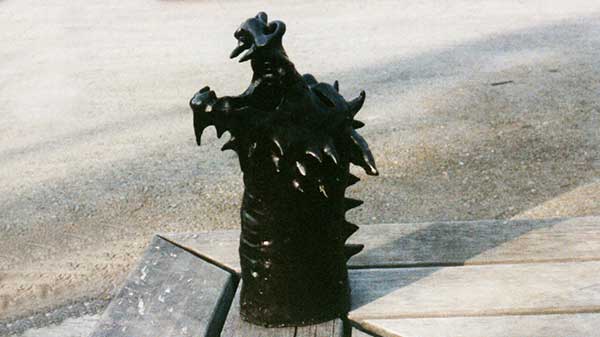 SECOND CASTING
The overall wax form (core figure + channels + cone) is then submerged into plaster up to the top of the pouring cone. My plaster casting was 300 pounds! This casting is then turn upside-down and put into a kiln. The heat causes the wax to melt and burn out, leaving again, the negative shape of the wax form. While still hot, the plaster casting is turned upright so that that now-empty cone shape is visible and molten metal (in my case: brass) is poured into the cup. Then you say a prayer and wait for all to cool.

MOMENT OF TRUTH
This is the point where you find out if your investment, your roll of the dice, will pay off. You literally sledgehammer the plaster away from the metal shape within it. If the gods were smiling, all the nooks filled in with metal and your original figure (with the addition of some metal channels and pouring cone) will be revealed. In my case, all went very well. I just needed to hack off the extraneous metal channels and cone and clean up the brass shape.

This was quite an involved process and I actually left out a lot of the strategy that is required in investment casting. (It wasn’t just prayer and the gods that lent to things going as well as they did: there was much forethought and planning!) After all that I described above, the brass dragon head sculpture could certainly stand on its own right. Although kind of kitsch-y, I still wanted it to be a proper working lamp. So I fabricated a plaque that held a lightbulb socket and a welded mount strong enough to hold the heavy brass head and neck (it had quite the moment arm). I screwed in a red bulb to give the impression of fire coming from the mouth and eyes, et voila: a dragonhead lamp! Smaug lives again.